Cody B. Doyle, DC, FIANM is a chiropractor and acupuncturist. With over 23 years of experience, Dr. Doyle has devoted his entire career to researching and exploring alternative medicine and modalities. He graduated from the University of Texas at Arlington and then attended Texas Chiropractic College in Pasadena. 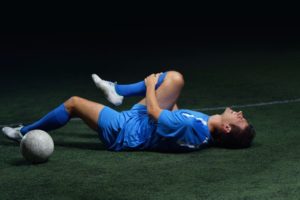 It’s an unfortunate fact that if you play sports, you are probably going to get hurt. Impact injuries, overuse injuries, and twisted ankles are all too common in many sports, and even the most careful sports players can’t always avoid them.

If you’ve sustained an injury while playing sports, Argyle area chiropractor Dr. Cody Doyle can help you recover. With his holistic practices, you can heal without the need for drugs or surgery.

Of course, some sports are more likely to lead to injury than others – and you may be shocked by which sports can be the most dangerous. Below are the five sports which lead to the most injuries.

Since it’s a low-impact sport, it may be a surprise that swimming is number 5 on this list. However, swimming is the cause of over 184,000 injuries a year. Swimmers 5-14 make up around 40% of those injured while swimming.

As they’re very similar sports (often considered the male and female versions of the same sport) and cause similar injuries, it makes sense to group baseball and softball together. However, even if you considered these two sports separately, they’d still both make the list of most dangerous sports. Together, baseball and softball lead to nearly 244,000 injuries in a year, with softball contributing 100,000 of those injuries and baseball contributing the rest.

Football is an obvious candidate for this list, but you’re likely surprised that it’s not number one. You may also be surprised that neither professional football players, college players, nor high school athletes top the list for injuries – players 5-14 incur around half of the football-related injuries. In 2013 alone, over 420,000 football players were injured while playing football, which means that over 210,000 5-14 year-olds were injured.

The number one most dangerous sport – according to several independent studies – is basketball. It’s estimated that over 533,000 athletes were injured while playing basketball in 2013 – that’s over 100,000 more than those injured while playing football. Players 15-24 incurred close to half of those injuries, and (once again) the most common injuries were ankle injuries, strains, and sprains.

Contact Us if You were Injured while Playing Sports

If you or your child suffered musculoskeletal injuries while playing sports, visit Dr. Doyle at Doyle Chiropractic and Acupuncture. We’ll treat the cause of your pain and get you back to playing your favorite sport as quickly as possible. Call us today at 817-767-5430 to schedule a consultation.

Cody B. Doyle, DC, FIANM is a chiropractor and acupuncturist. With over 23 years of experience, Dr. Doyle has devoted his entire career to researching and exploring alternative medicine and modalities. He graduated from the University of Texas at Arlington and then attended Texas Chiropractic College in Pasadena.